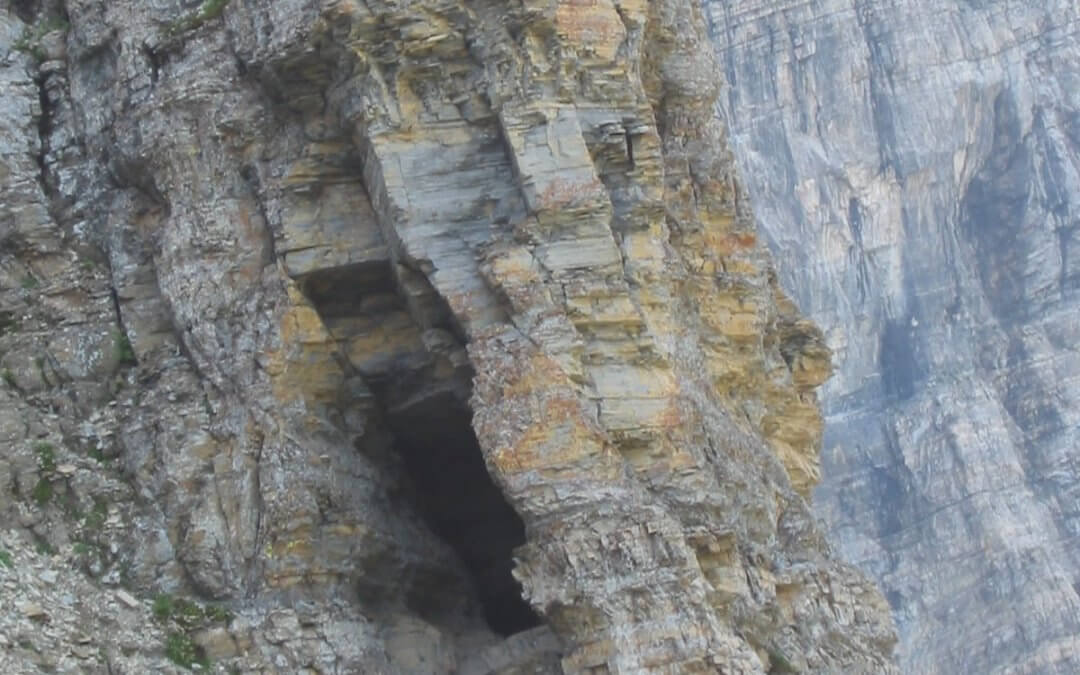 The first time I realized that all that “stuff” I fantasized about living my life was actually meaningless was after I first reached the summit of a Canadian Rocky Mountain range.  To get there, I had to pass through fear after fear after fear.

The first fear arrived about 30 minutes into the heavily-wooded portion of the climb from the base of Waterton Lake.  Moving quickly up the trail I ran into a great big pile of steaming berry-filled bear scat.  The berries mesmerized, but the steam reminded me that the bear must not be far enough away from me for my safety.  So I laughed in fright, and began making a big noise to warn the few hikers coming up behind me that we had company!

About 45 minutes away, still scared, I heard a rustling in the bushes to my right that sent a dagger through my heart.  Was this how my life would end … as an entrée for a well-appetized grizzly?  Well whatever. I knew I was taking a risk on this all-day hike to Crypt Lake in Glacier Park, Canada, but being a fit girl, and in love with panoramic views … I pushed away my rational self and continued on with the climb.

All I had in my head was an endless loop from one of my favorite Emily Dickinson poems, like an earworm that just wouldn’t quit:

“To live is so startling it leaves little time for anything else.”

Soon I reached a stunning clearing, and my fear began to lessen. That is, until I reached the massive shale mountain side.  You see, I had forgotten my Timberline hiking boots and was wearing a pair of untreaded aerobic shoes.  How ridiculous can one blonde be?  I was horrified by this realization as the mountain became steeper and steeper, and the shale more slippery with each and every step.

Then there was that nasty change in the weather.  Classic for August in the Rockies, but still, the day had been so blue-skied and beautiful just three hours ago.  Damn!  Just my luck, I’d already dodged a bear, and now an ominous storm was brewing … and I still had a long, long way to climb to reach the top, and with ridiculous footwear to boot!

For now, the next goal on this climb was to reach a small creek and campsite, where I’d allow myself a little break to prepare for the next, and most intimidating part of this adventure.

This hike is considered to be one of Canada’s top ten climbs because of the varied topography and a famous cave that you must crawl through to reach its exit opening.  And to get to the cave, you must first traverse a seriously-narrow path leading up to a rusty red metal ladder that had somehow been anchored to the mountain.

It was almost enough just looking at the pathway up to the ladder, as one slip of my feet would likely send me careening down a heart-stopping vertical drop, that had no end in sight.

As I steeled myself for this next challenge, I sat on one of the boulders at the foot of the path to spend a few moments in prayer as I faced one of my biggest fears: heights.  I’d experienced situational vertigo before, and I knew how the panic that overcame me was so completely paralyzing.

If that happened now, I’d be in big trouble. After more than a few moments with God, asking for the courage and strength required for me to get to that enticing cave, and beyond on to Crypt Lake … I was convinced that God understood what I had repeated a few dozen times: “I can do this by your strength and protection.”

And so, as if the wind had picked me up, I found myself on the path, charging toward the famous ladder.

What will I do when I get there? Will I be able to ascend the ladder?  After what seemed like an eternity of fearful hours, my shaking arms grabbed for the ladder and up I climbed. One rung, two, three, four, five … and only four more to go. But no …

Now that I’d reached a point were I could see the top of the ladder and the opening to the cave … I saw there was a large gap that I’d have to pass over in order to reach the cave … my new mantra quickly became: “Oh God, please stay with me!”  With my heart pounding even harder than ever, I scaled the last four spiraled rails.  Once at the top, I knew I had to go forward, because I was even more frightened to go back.

But even as I was thinking that thought it hit me that I was going to confront this fear again to get back to the lake where a boat will pick me up … and that the boat will only make two trips: one at 3:30, and one at 4:30!  What if I can’t make it back in time? God … why did I decide to take this challenge on?  Why?  I am not prepared.

Just as I felt myself about to cry, a bolt of energy propelled me across to the cave. Moving slowly to calm my nervous system down, I thanked God for my success. And as I reached the exit to the cave, I recognized the epic view on all the photos I’d seen of this climb … that I was now so grateful to witness in person.

If I could only had just a few moments to enjoy the feeling … but no! I pushed my own panic button once again, as I realized that I had no clue as to how I was to get out of the cave.

The drop to the path below was intimidating enough, but coupled with taking in the sheer vertical drop to sure death … I was reeling again. What can I do?  My body won’t move.  I’ve failed!

Just as my tears were about to start gushing, an angel appeared in the form of a man who looked up at me from the path, obviously sensing that I was freaked out, and he said: “Are you stuck?”  And I had to admit “yes!”

With the most compassionate look on his face, he said: “Relax honey. I’m here to help you. You’ve made it it this far, you’ll be fine.  Just look up, never down! Give me your right hand and just slide down the rock.  As soon as you feel you feet on the ground take hold of the cable embedded in the rock.  It’s not far to Crypt Lake from here and congratulations, you’ve done it!”

We hope we can stay in touch.
Join our community, won’t you?

Walk as if you are kissing the Earth with your feet.